Everyone loves The Shawshank Redemption. It's just one of those honest movies that grabs everyone with its powerful message. The 1994 film even sets atop IMDb's user-voted list of the best movies of all time. When KoldCast TV recently posted their 11 Things You Didn't Know About The Shawshank Redemption I knew I had to share it with you here. Plus, I thought I'd throw in a few more tidbits about the movie that I too love.

1. Animal Cruelty? The ASPCA closely monitored all scenes between Brooks, the elderly library attendant, and his pet crow. They actually objected to a particular scene in which Brooks fed a live maggot to the crow. Apparently, this was considered "cruel" to the maggot (really?). In order to finish the scene per ASPCA guidelines, the crew used a maggot that already died of "natural causes." Right.

Brooks was played by two-time Academy Award nominee James Whitmore. After the film, Whitmore went on to star in 2001's The Majestic for Shawshank director Frank Darabont.

2. Mini Morgan Cameos Morgan Freeman's son, Alfonso Freeman, has two notable cameos in the film. The photographs of a young Morgan Freeman on Red's parole documents are actually pictures of Alfonso. Also, when the new batch of prisoners enters the prison for the first time, Alfonso is the young man taunting the inmates, "Fresh fish! Fresh fish today! We're reeling 'em in!" 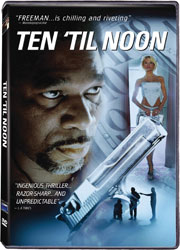 The 50-year-old Alfonso is an actor in his own right. And, yes, he resembles his dad quite a bit. Here he is as the star of his own movie -- which seems to take advantage of the resemblance. Didn't you think it was a Morgan Freeman film at first glance? He appeared along side his father in The Bucket List. Naturally, he played the elder Freeman's son. Besides these two, there are five other movies which feature both actors.

3. Why You've Seen it 100 Times This one's a bit more obvious, but ever wonder why The Shawshank Redemption always seems to be on cable? Once the film's VHS/DVD rentals and sales took off under Warner distribution, Ted Turner sold the rights to his own network, TNT, for a relatively meager sum. So blame Turner for your watching The Shawshank Redemption 100 times on TV even though you own the DVD.

Yeah, this one is obvious. Plus, people love Shawshank. When have you been channel-surfing, saw it on, and not stopped? It's guaranteed ratings, folks.

4. Rob Reiner Prolific actor and director Rob Reiner, who directed two other Stephen King adaptations, Stand by Me (1986) and Misery (1990), was initially interested in directing The Shawshank Redemption. He intended to cast Tom Cruise as Andy and Harrison Ford as Red.

As parodied once on South Park, Rob Reiner is known for his anti-smoking activism. A commenter on Digg said, "If [Reinter] had [directed] I'm sure Shawshank Redemption would have been the first prison movie to not involve the trading of cigarettes." True, very true. Also, can you imagine how different it would have been with these two other actors in the lead roles? The movie is so ingrained in my subconscious now that I can't even fathom it.

5. Yoo-Hoo, Not Doo-Doo The feces Andy crawls through in the sewer scene is actually chocolate syrup. Not that we would expect it to be actual dung or anything. Interestingly, a fan who has visited the Mansfield Reformatory, the former prison-cum-Shawshank set, noted that a section of that tunnel still smells like chocolate.

According to the official site for the location, it was actually a mix of sawdust, chocolate syrup and water. Yes, you can tour Mansfield, Ohio reformatory which served as the location for fictitious Shawshank.

6. Biblical Allusion In a subtle touch of cinematic symbolism, when Warden Norton examines the Bible in which Andy hid his rock pick, he opens it to the Book of Exodus, which tells the story of the Jews' escape from bondage.

Many people view Andy Dufresne's persecution and eventual rebirth as a Jesus Christ allegory. If you read this comparison, the imagery is pretty stunningly similar. It will give the film even more impact to Christians. It also gives new meaning to the Christ pose in the original poster above.

7. Set Design The interior shots of Shawshank State Prison were taken on a set built from scratch. The cell block was created in an old warehouse not far from the Mansfield Reformatory (also known as the Ohio State Reformatory).

Again, you can tour many of the film's shooting locations in Mansfield, located halfway between Columbus and Cleveland. The prison grounds, the building where Brooks and Red stayed after release, the warehouse mentioned above, and the park where Brooks feeds the birds are all part of the town's "Shawshank Trail."

8. Inglourious Inmate Brad Pitt was originally cast to play the role of Tommy Williams, the inmate who could have exonerated Andy. Instead, Gil Bellows got the part.

Of course Brad Pitt would go on to star with Freeman the following year in Seven. Bellows continues to act, mostly in smaller movies and TV shows. He did star on the Ally McBeal TV series.

9. Final Scene The final scene, in which Red finds Andy on a beach in Zihuatanejo, Mexico, was not intended to be in the film at all. Director Frank Darabont wanted the film to stay as true to Stephen King's short story as possible, and refused to shoot the scene because it was not in the original story. Associates persuaded him to shoot the scene, but Darabont still wanted to cut it until positive reactions from test audiences convinced him otherwise.

Unlike the setting of the prison, Zihuatanejo, Mexico is a real place. It's on the southwestern coast of the country. Here it is on Google Maps. Also, the King short story is titled "Rita Hayworth and the Shawshank Redemption." It's part of the collection titled "Different Seasons" which was released in 1982. The story also includes the subtitle "Hope Strings Eternal." Incidentally, the collection of novellas also includes "Apt Pupil" which was turned into the 1998 film.

10. Dollar Baby Darabont became pen pals with King when he adapted his 1986 novel, The Woman In The Room, as part of the author's "Dollar Baby" program that, for $1, grants student filmmakers permission to adapt his books and screen them at film festivals. They finally met for the first time when Darabont optioned The Shawshank Redemption. Darabont also directed King's The Green Mile.

Shawshank was Darabont's first feature film. The Green Mile was his second. The auteur joked at the time that he had the narrowest niche in all of film-history: Stephen King prison films. Darabont also adapted King's The Mist for a 2007 film.

11. Identity Crisis In King's version, Red is an Irishman (hence the name). In casting Freeman for the role, perhaps Darabont didn't remain too faithful to the author's character detail, after all. So when Andy asks Freeman's character why they call him Red and he replies, "Maybe it's because I'm Irish," it's more than just a dry quip.

Eleven is never enough. Here are a few more bits of trivia about the film.