Review: 'Schitt's Creek' is a trailblazer in modern television

My wife first discovered the hilarious show Schitt's Creek and she begged me to watch it. I gave it a shot for a couple of episodes, but I just didn't get it. While I love Eugene Levy and Catherine O'Hara normally, I really wasn't feeling it.

Contrary to what my wife thinks, I can admit when I was wrong.

Having recently discovered an abundance of free time thanks to surgery, I decided to give Schitt's Creek a second chance. It was an astute move if I do say so myself. I'm not sure if it was the drugs in my system or not, but I found myself in a much better disposition for the show and it resonated with me in a big way.

I finally got what seemingly everyone else in the world already knew, Schitt's Creek was a hilarious show and a defining piece of entertainment in the streaming era of "TV."

For better or worse, we live in the binge era of entertainment. The old ways of thinking about "TV" where new episodes debuted each week and weren't available after they aired is long gone. Instead, anyone can produce content and then worry about distribution later.

A good example of this is Letterkenny, another Canadian show, that first debuted on Crave before finding a wider audience via Hulu. Likewise, Schitt's Creek first appeared on Pop TV before moving over to CBC in Canada and then ultimately found its greatest reach on Netflix.

As streaming continues to take off, people are devouring their entertainment in many different ways. But streaming has its negatives as well. We are now in the content wars era as more content providers like HBO, Disney and Universal enter the market with their own streaming options and reacquire their own content.

Ask fans of Friends who recently were left scrambling when their favorite show moved from Netflix to HBO Max. So, you're either left having to buy into all of these new offerings or rely on physical media. Thanks to Lionsgate, you can now future proof yourself and own the complete series of Schitt's Creek on DVD.

The offering doesn't just present each episode from the series, but it also includes deleted scenes, bloopers and featurettes that will tickle the funny bones of even the most diehard Schitt's Creek fan. And best of all, you will own it in perpetuity since no one can take your DVD collection away from you.

I'm sure Lionsgate is tickled pink with the timing of their physical release. Season six of Schitt's Creek recently debuted on Netflix last month and thanks to its massive (and record-setting) number of Emmy wins in September, the show has never been hotter.

While Schitt's Creek was certainly a household name before its dominant performance at this year's Emmys, it definitely built a thirst for the show from even non-fans. Believe it or not, not everyone has Netflix, so this DVD collection might be the only way for some people to enjoy the show here in the States.

Whether you're just now discovering the show or you've been a fan since day one, Schitt's Creek: The Complete Collection is a perfect gift for the approaching holiday season. I have a feeling that this collection will find its way under many Christmas trees.

It took a second chance for me to appreciate the comic genius of Schitt's Creek, but I'm so glad that I came back to it. Daniel Levy is a budding comic genius in his own right and seems set to follow in his father's footsteps towards Hollywood glory.

If you've yet to discover this show, give it a chance. You won't be disappointed. Schitt's Creek: The Complete Collection is now available on DVD. 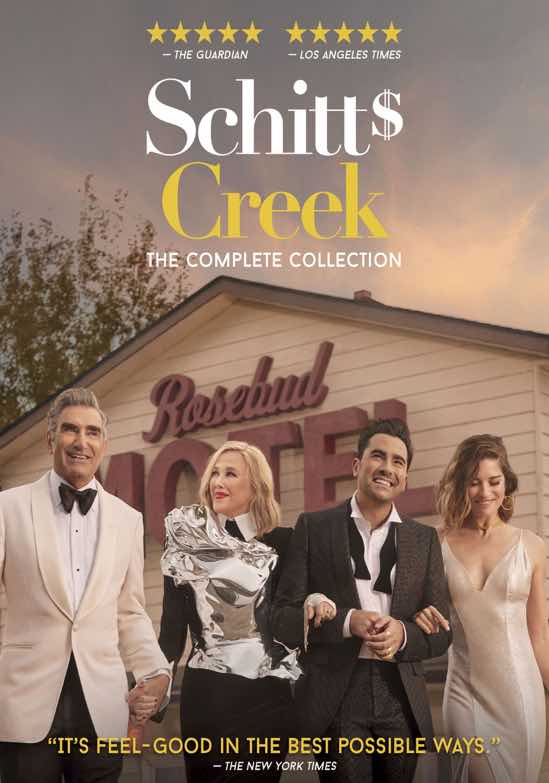