Review: 'Toys of Terror' is the gift you can't wait to return

When I was a kid, there was one toy that simply gave me the creeps whenever I would see it. In fact, it got so bad that my parents would hide it in a closet, but every so often this toy would rear its ugly head and the nightmares would begin anew.

This toy in question was the monkey that would bang together little brass cymbals. I'm sure the intent behind the toy was to elicit fun in kids, but it was a nightmare-making machine that left me with countless sleepless nights.

Yes, it's the toy on the artwork for 1988's Monkey Shines, but is it really a toy? I'm convinced it was a torture tool invented by parents to keep their kids in line and it certainly worked for my parents. Either way, Monkey Shines wasn't the cause of fear of the toy as the film came out when I was in my teens, and I don't even think the toy is in the film.

No, some graphic designer from the late 1980s tapped into this unconscious fear of this toy and created an image that still gives me chills to this day. So, when I first heard about Toys of Terror and saw the artwork, my terror level went sky-high with the fear that this brass cymbal monkey would be one of the murderous toys.

Thankfully, that precise toy wasn't in the movie, but it's pretty apparent that the monkey stand-in toy is supposed to represent that toy or some other iteration of it. Either way, my initial trepidation on hitting play on this movie was high and the filmmakers couldn't have asked for a better audience to absorb their film.

A family's fun Christmas getaway quickly goes sideways when the kids realize that their parents secretly have plans to work on an old, creepy mansion during the holidays in the hopes of flipping it. Left mostly to their own devices, the kids discover a stash of old toys that seem innocent at first blush but hide many more sinister secrets under their porcelain and rubber. Can the family escape with their lives, or are they fated to never celebrate another Christmas ever again?

There is a special section of heaven set aside for Christmas horror films. Movies such as Black Christmas, Silent Night, Deadly Night and Santa's Slay are revered classics that thread that needle perfectly between naughty and nice. Toys of Terror is not one of those films.

My first red flag came with its release date. January is notoriously known as the month where film companies dump unwanted films to little fanfare, but this is magnified with Toys of Terror. Great Christmas horror films usually arrive for consumption sometime in November. It's the perfect month to take advantage of the leftover spooks from Halloween and the early giddiness of Christmas. It also allows the movie to generate some buzz so that it peaks right around mid-December, aka the perfect time for some holiday horror.

I mean if Die Hard can be a Christmas movie, then so too can Silent Night, Deadly Night. But Toys of Terror was released a full three weeks after Christmas. With a thin release schedule, thanks to COVID-19, a December release of Toys of Terror should have been a no-brainer. The puzzling delay is perhaps a glimpse into the studio's lack of faith in it.

And yet, the film itself has some redeeming qualities to go with its rather predictable plot and mediocre scares. Toys of Terror won't find itself on any Best Horror film lists, but it does fully leverage the whole creepy kid theme that is running rampant in horror these days. It also tries to tap into the Annabelle side of spooks, but the ridiculousness of the toys themselves doesn't do the film any favors.

But, we are in a new normal thanks to COVID and to be frank, this is one of the best smaller-budget horror films that I've seen come down the pipeline in the last year. Beggars can't be choosey as they say and you could do a lot worse than Toys of Terror.

As always, your mileage may vary but Toys of Terror is an imperfect horror film that will help to scratch your itch until the next scary flick comes your way. I only wish this could have been released last month to fully take advantage of the holiday. Toys of Terror certainly reminded me of 2020 in so many places.

Toys of Terror is now available on DVD. 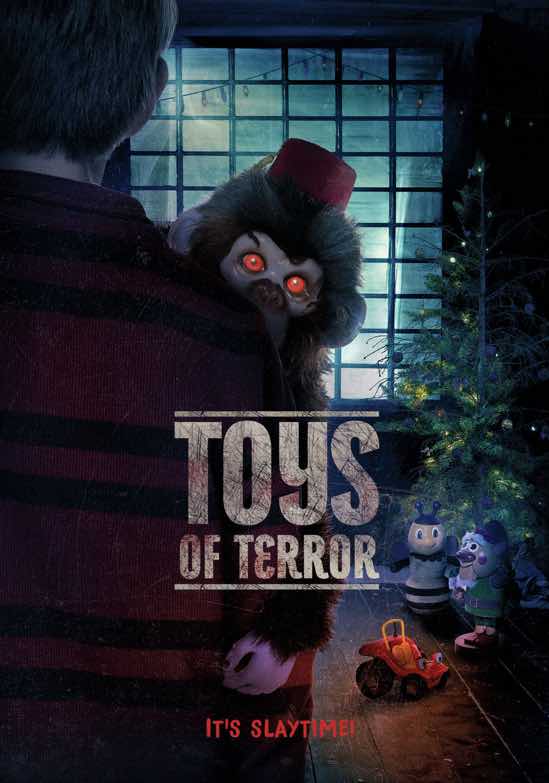