As you know I am a self-proclaimed horror aficionado. I've been watching blood and guts disembowel themselves from their unlucky victims since I was way too young, so I consider myself a bit of an expert when it comes to horror.

The genre is shy to jump on trends and exploit them until they run their course. Whether it's sororities, Santa Claus, or cheerleaders, horror films know that their bread and butter is the young, vulnerable female. Whether they are victims or killers, the horror genre seemingly never misses an opportunity to exploit young women and their blood and guts.

This "trend" continues with Lifetime's made-for-TV collection of horror films Cheer! Rally! Kill!. The five-film collection features "horror" films about cheerleaders that debuted on the Lifetime Network in September of 2019.

The two headliners of the collection are Denise Richards and Vivica A. Fox. They both turn in decent if not weary performances in their respective movies. Denise Richards plays an overly ambitious mother of a perspective cheerleader in The Secret Lives of Cheerleaders, while Vivica A. Fox plays a cheer squad coach in The Wrong Cheerleader.

Denise Richards as the mom figure really hits home that I've gotten old. Long gone are the days where she was playing the young vixen in movies like Wild Things. Now, it's her daughter that gets caught up in tawdry situations beyond her control. Richards is game, but it's apparent through her sneer that she would like to find a time machine and relive her youth.

Meanwhile, Vivica A. Fox turns in a pitch-perfect performance and knows what sort of film she's acting in. While the film was enjoyable, I was shocked to learn that it actually gave birth to a sequel. She also produced the film, so her buy-in may have something to do with her more performance.

Overall, you know that I have a predisposed dislike for made-for-TV horror films. By censoring the violence, I feel like the films are ultimately chaste and a disservice to the genre as a whole. Take Identity Theft of a Cheerleader in this collection. It's obvious that Lifetime was simply looking for another film to shoe-horn into their promotion. It barely qualifies as a horror film and it barely watchable to boot!

That said, your mileage may vary and the cost for five films is very reasonable. If you're into these sorts of Lifetime films, then you'll want to check out Cheer! Rally! Kill!.

The Secret Lives of Cheerleaders follows Ava (Savannah May), an incoming transfer student who reluctantly tries out for the cheerleading team at the insistence of her overly ambitious mother, Candice (Denise Richards). As she transitions into her new life, Ava discovers becoming part of the squad comes at a price.

Identity Theft of a Cheerleader is the story of 31-year-old high school drop-out, Vicky (Maiara Walsh), who decides to steal the identity of a cheerleader in order to redo her senior year of high school.

The Wrong Cheerleader follows Becky (Cristine Prosperi), a sociable high school cheerleader who flies under the radar when it comes to receiving attention from boys until she catches the eye of the charming and handsome new student Rob (David Meza). Rob seems like the ideal boy, until his affection turns into obsession, and he stops at nothing to keep Becky all to himself.

The Cheerleader Escort is about college freshman Cassie (Alexandra Beaton), who is overjoyed about the new friendships, status and access to social events that come along with earning a spot on the cheer squad. When she meets Terry (Damon Runyan), the charismatic president of the alumni association, at an event, Cassie finds herself falling for this older man despite their age difference.

Undercover Cheerleader follows Autumn (Kayla Wallace), a beautiful transfer student who goes undercover as a cheerleader to do an exposÃ© on the cruel culture of the squad for her school newspaper. But when someone begins viciously attacking cheerleaders, she starts to fear for her own life. 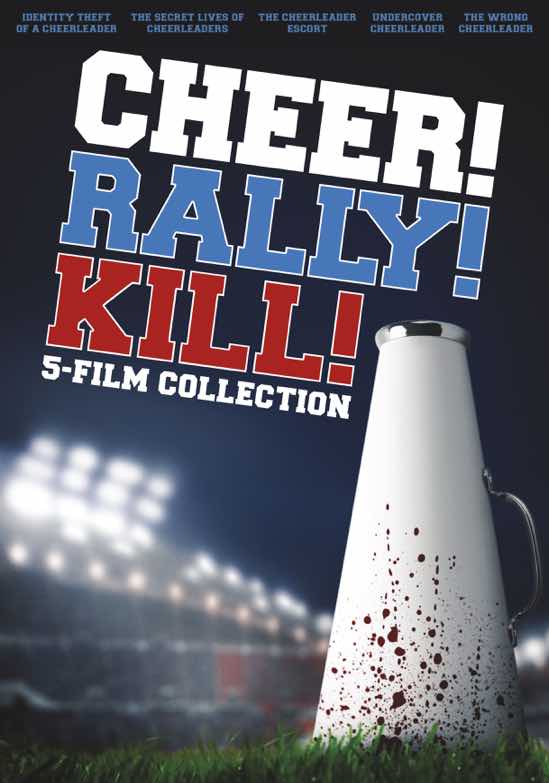