When did Morgan Freeman become the latest Nic Cage? Or Eric Roberts? Or Danny Trejo?

If his latest film Vanquish is any indication, Freeman either lost a bet or his career is about to take a downward trajectory like his colleagues above. Please hope that it is the former, because who really wants to see the legendary actor taking bit parts in atrocious B-movies when he still has so much to offer Hollywood.

That's not to say that there aren't any redeeming parts of Vanquish, but it's the sort of film to put on the tube late at night hoping that the sandman takes you before the opening credits end. The good thing, in this case, is that the opening credits are ridiculously long and ridiculous, but more on that later.

Ruby Rose stars as a mother and former Russian drug courier who takes care of a retired dirty cop that is confined to a wheelchair, played by Freeman. The retired cop holds Ruby's daughter hostage and forces her to make five pickups of dirty money over the course of one long night.

I need to get this out of the way right now. I'm a pretty big Ruby Rose fan. I think she was spectacular in Orange is the New Black and I really dug what she brought to Batwoman. I'm not one to let politics or beliefs get in the way of enjoying a movie or a TV show. I know that she's an outspoken advocate for her causes and I'm happy for her.

But this film really missed its mark and was a disservice to what Rose could have brought to the table. It's like the filmmakers saw what she did in John Wick 2 and simply said, "do that." That performance works in John Wick 2 because Keanu is always there to overshadow you. When you take away his almighty presence, the limp stand-ins from Vanquish don't stand a chance.

It's not that Rose's performance in Vanquish is bad, it's just that there's substance to weigh it against. Arguably, the best moments occur between Rose and Freeman, but they are fleeting and beyond the absurd. I mean, it's almost like the production's budget was so modest, they couldn't afford even one or two baddies with machine guns to protect the paralyzed Freeman.

I'm giving away any spoilers here, but the whole plot revolves around a hostage situation where a wheelchair-bound Freeman uses unseen henchmen to snatch Rose's daughter and then gives her guns to which the idea to turn them on Freeman never crosses her mind until it's convenient for the plot.

But beyond the simplistic and outrageous plot, the real low point of this film is the acting beyond the leads. I've seen better performances turned in by mannequins in a department stores than what we get with some of the supposed heavies in Vanquish. The majority of which look like backwoods extras lifted from the casting pool of Deliverance. Given that the movie is filmed and takes place in Biloxi, Mississippi, that's not a stretch, but it just doesn't jive with the sophisticated crime syndicate that the filmmakers would have you believe they are.

Speaking of filmmakers, Vanquish was written and directed by George Gallo. You probably don't recognize the name, but he is the one who came up with the story for Bad Boys back in the mid-'90s and has been trying to replicate that magic in the decades since. Spoiler alert: he's still trying to rekindle that particular formula.

Maybe Gallo has something on Morgan Freeman because he was also able to convince him to star in the earlier film The Poison Rose with John Travolta. That movie was a disappointment, Vanquish was a trainwreck, but the future looks bright for Gallo.

Well, if you believe his own press clippings that is. Remember when I said the opening credits were crazy long? Well, they clock in at over six and a half minutes and mainly feature news reports over various news articles detailing the rise and fall of Freeman's character. If you pay close attention to a secondary story on one of the front pages, you'll learn that Director George Gallo's film "The Comeback" took home a record 15 Oscar nominations.

It seems that Gallo's hubris far exceeds the reality of Vanquish. Given his recent track record, his next movie will be more likely to score numerous Razzie nominations before being recognized by the Academy.

I should have known then what I was in for.

As always, this review comes with the standard disclaimer that your mileage may vary. However, I watch this film the day after seeing Nobody and the two couldn't be more different than night and day. If mayhem violence is your thing, then you may get a rise out of Vanquish, but the sheer ridiculousness of it might be too much to handle.

Vanquish is now avaiable on Blu-ray and DVD. 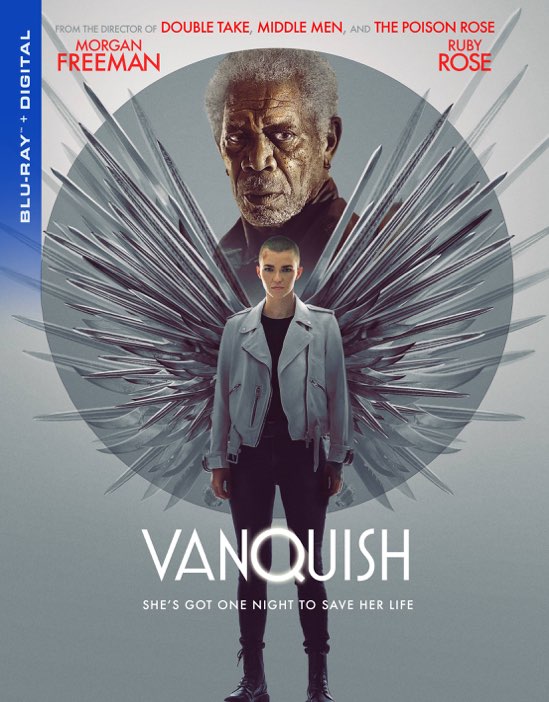 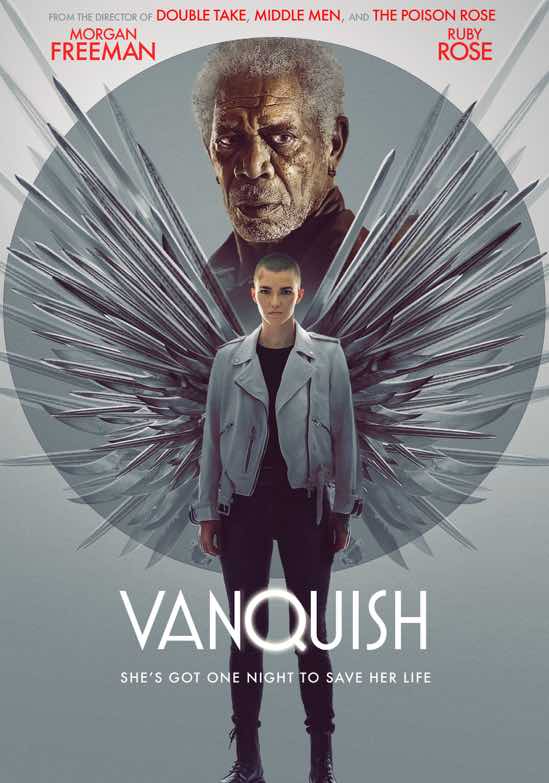