Review: 'Infinity Train: Book Two' is an existential hit for the whole family

When I discovered Infinity Train last year, it was a revelation for our family. We were a little late to the party so to speak, but we were more than ready to jump on the bandwagon. With so many dangling threads from Book One, it was a foregone conclusion that there would be more installments, but we didn't know just how much we needed Infinity Train in our life until we watched Book Two.

The series picks up just about where it left off in Book One. Tulip, the main protagonist from Book One is home safe, but the Infinity Train continues in its sole purpose of teaching and correcting children in their miscreant ways. This time, it's Mirror Tulip, or MT, who Tulip liberated in Book One's episode The Chrome Car, that carries the action in Book Two with a new human passenger, Jesse.

While Book One spent plenty of time in world-building and establishing the rules of the Infinity Train, Book Two pushes those boundaries dives deep into existential issues that trouble us all through its protagonist MT. Not only is she forced to constantly question her existence both on the train and in a potential real-world situation, but she's also stuck trying to find where she fits into this framework.

While the initial slate of episodes focused on Tulip getting back safely to her family, this new slate of episodes spends a great deal of time on purpose and expectations. There are several parallels between MT's journey and that of Pinocchio's quest to become a real boy. While MT is confident of her place in the world, she's also certain that she's not meant to live on the train forever.

The season's 10 episodes have the same quick pace as season one and it truly feels as though creator Owen Dennis has found his niche of providing fun, educational content without the navel-gazing that sometimes creeps into other lesser animated fares. The tight story-telling allows the show to go in and tell its story while leaving enough breadcrumbs along the way to chase in future seasons.

Each of the characters have distinct fully-realized character arcs that both entertain and communicate valuable lessons about self and identity that young children should cherish. Think The Wizard of Oz set on the train from Snowpiercer. Of course, it's not so simple as searching for a brain or a heart, but the sentiment is still the same.

My favorite character from Book One, One-One returns, but he's retaken his job as the train's conductor and is more convinced than ever that his place in life is to provide his train as a place where kids can grow both as better humans, but also with an appreciation for the world around them.

One-One's prime directive comes into a direct assault by the gang known as The Apex. These passengers have decided that they want to live on the train forever, so they will do whatever it takes to build their number up to a level that insure that their exit portal will never come into existence. MT also challenges One-One's decree that those characters on the train have no place in the real world and their only purpose is to serve the kids as they progress through the labyrinth of the train.

Not to spoil things, but Jesse and MT are able to team up to help challenge the existing dogma. The parallels for children like my own watching at home is that they are not constrained by real or perceived limitations placed upon them. It would seem that the series' overarching lesson is that you can be who and whatever you want to be. This is a refreshing education without feeling preachy.

My family loves Infinity Train and can't stop watching them over and over again. The short playing time makes it possible to watch the entire season in a long afternoon. The show debuted on Cartoon Network before transitioning over to HBO Max. It has a devout and vocal fanbase, but the train appears to have reached its final destination unless it can be saved at the last hour.

I really hope that Infinity Train rides again because this is one program that I can sit with and enjoy with my kids over and over again. Infinity Train: Book Two is now available on DVD and if you have young children, it's a wonderful investment in your sanity. 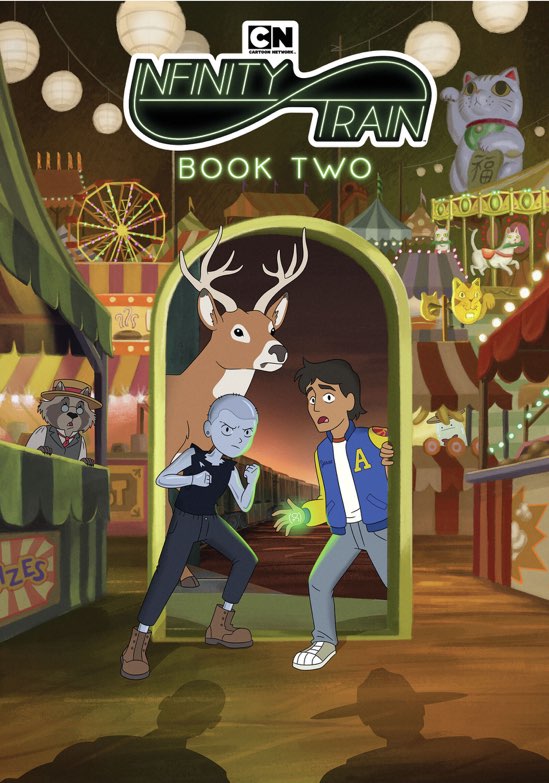