Director Hank Braxtan has sort of whittled out a bit of niche in the land of B movies. He's not afraid to bring outrageous CG animals to life on the little screen. More often than not, his work is very watchable as far as B movies go.

Sadly, Jurassic Hunt is not one of those movies.

Starting with a genetically enhanced polar bear in Unnatural, Braxton moved on to snakes and dragons before settling in on dinosaurs for his latest effort. The low-budget techniques and CG worked well for him in his earlier movies, but the stakes are bigger this time. Unfortunately, these techniques run up against the ceiling of their effectiveness and the result is a film that borders on unwatchable at times.

A female adventurer joins a crew of male trophy hunters in a remote wilderness park under the guise of hunting genetically recreated dinosaurs. When things go wrong, the team try to escape the park, but the hunters quickly become the hunted.

From the synopsis alone, this would seem like both an interesting story and one that would be right up Hank Braxtan's alley given his earlier work. There's just something lacking in the script that could potentially distract the viewer from the painfully obvious CG work with the dinosaurs.

Had they simply spent a little more money to make the dinosaurs blend in with their surroundings, the bad CG wouldn't have been as noticeable. However, as it stands, the dinos look like something you could add as a filter on an app. Couple that with painful dialog such as "the Jurassic hunters have become the Jurassic Hunted" and your eyes are bound to roll right out of your head.

The sad thing is that with its mix of Jurassic Park and The Hunt, the story had real potential. I'm all for slimy dudes getting their comeuppance by an embedded investigative journalist or activist or whatever, but please give her more to work with than "woman with heaving bosom."

I sort of figured that we had moved on from this sort of exploitation since the onset of the "MeToo" movement, but I suppose there will always be an audience who is on the edge of their seats waiting for a wardrobe malfunction. Function over fashion should be the rule here, but the filmmakers obviously went in a whole other direction.

I suppose they were simply playing it up to the core audience, but in doing so, you tend to alienate a whole other segment that might be interested in the interesting story. When you pretty much only have one female character in the entire movie, giving her a scarf for modesty that is quickly rendered useless in the first act so that she can show off her cleavage for the balance of the film is a pretty bad look.

It's pretty apparent the type of audience that Jurassic Hunt is aiming for, but I don't know if there's enough blood and gore to satisfy that crowd. To be honest, it feels like a script that might have been something special at some point that was felled by a thousand notes.

Sometimes the old adage about having too many cooks in the kitchen really does ring true. Your mileage will always vary, but I'd be very hard-pressed to recommend Jurassic Hunt for anything else than some hard laughs at the ridiculous CG and situations that the characters get themselves into. 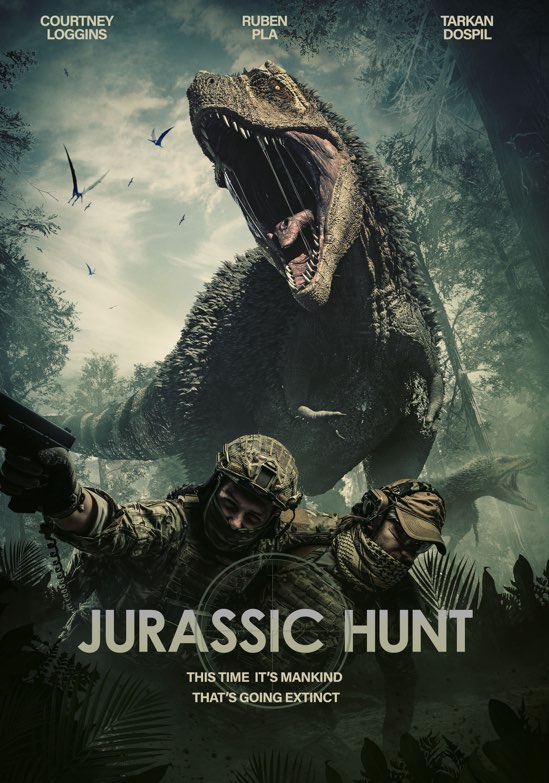