Review: Relive the time of your life with the 4K UHD version of 'Dirty Dancing'

A decade before Celine told us that her "heart will go on," we had "the time of our lives" with Dirty Dancing. When you think of Dirty Dancing, one of two things most likely pop into your head, either the quote "Nobody puts Baby in a corner" or the song "(I've Had) The Time of My Life."

In 1987, I was 13 years old and in the throes of puberty. Enter Jennifer Grey. What was most likely a benign movie about a family vacation in upstate New York took on a whole different meaning for those of us experiencing certain feelings for the first time.

Of course, I wasn't the only one having these feelings. For those looking for arousal from someone more of the male persuasion, Patrick Swayze solidified his place in popular culture as the sexy bad boy opposite Jennifer Grey's chaste Daddy's girl.

Dirty Dancing is one of those films that wasn't conceived to be a smash hit, but it took on a life of its own and became a cultural touchstone. It's a romantic comedy that pushes the envelope with a certain class take on Romeo and Juliet. The upper-crust family that Baby is born into snubs their collective noses at the hired help of the resort's dancers, which only fuels the passion of forbidden love.

Thirty-five years after audiences were first introduced to Johnny (Patrick Swayze) and Baby (Jennifer Grey), DIRTY DANCING remains a cultural icon. Loved by generations of fans, this cinematic treasure has inspired multiple films, a stage version, and reality dance competitions watched around the world. On the film's 35th anniversary, celebrate the magic of DIRTY DANCING and its timeless themes of love, family, class, and perseverance all over again.

It has been awhile since I last visited Kellerman's and my main concern was if the film would still holdup all these years later. I'm pleased to report that not only does it still get you in all the feels, but I found a brand new appreciation for the story that my hormones prevented me from catching the first time around.

While I was too busy enjoying all of the after-hours "dirty dancing" going on, there was a real and powerful message about classism and our inherent desire to worship power and money. It doesn't take long to look around in 2022 and see that we are still struggling with this divide - perhaps moreso than ever.

Our current political landscape might not be as simple as the haves vs. the have nots, but you can see a clear parallel to that breakdown. Thanks to the onslaught of "celebrity politicians," their inclusion in the political process only furthers this ideal that people with money and power are somehow better than others.

And once they are in power, they continue to reinforce this divide. It's this divide that is making us more polarized as a society and primarily responsible for many of our cultural issues. OK, maybe that's a bit too much to put on the shoulders of a little film from 1987, but it was perhaps a early warning signal and we failed to listen.

For me, Patrick Swayze will always be Derek Sutton from Youngblood, but there's no denying that his role a year later in Dirty Dancing cemented his place in the zeitgeist. Of course, Jennifer Grey first came across my radar in 1986 as well, playing the sister in Ferris Bueller's Day Off.

There's no denying though that their on-screen chemistry in Dirty Dancing is what makes this movie such a classic hit. They just struck lightning in a bottle and even 35 years later, it's apparent just how amazing they were in their roles.

The 4K UHD version of the film presents a new Dolby Vision transfer that allows the film to shine in a way that was never possible before. Several key scenes take place at night, in low light and the added contrast and deeper blacks allow the scenes to be shown in vibrant detail.

Likewise, the new Dolby Atmos audio track really lets the movie's award-winning soundtrack soar. While we tend to focus on Bill Medley and Jennifer Warnes classic song that ends the film, the rest of the music in the film is wonderful and the Atmos track is a great addition, especially in those late night dance scenes.

All in all, the price point is a bargain and the new 4K UHD version contains a wealth of previously available special features making it the definitive version of the film. So, let's go back to Kellerman's and watch forbidden romance bloom once again. 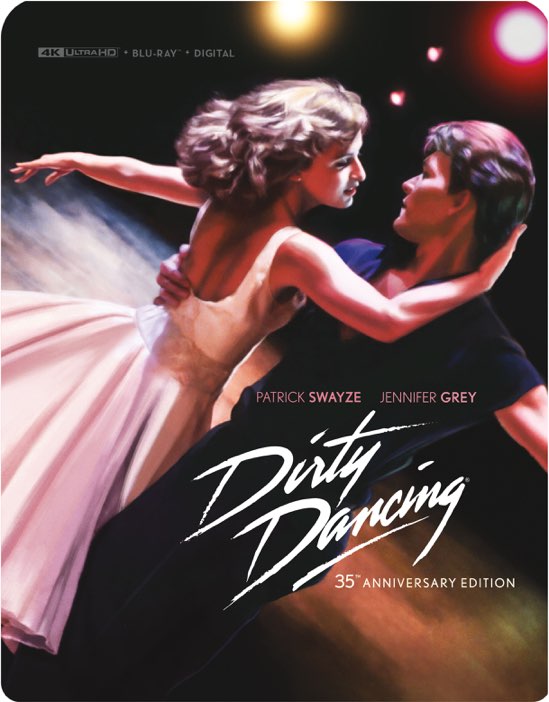